Vampire Themed EW:
“This week’s Entertainment Weekly delivers the ultimate guide to vampires. You’ll find interviews with the authors behind Twilight and True Blood, our list of the 20 greatest bloodsuckers ever, and Anne Rice’s pick for the best new vampire — as well as a talk with her about how she revolutionized the vampire legend decades ago with Interview with a Vampire.”

I can't WAIT to see this - I love True Blood and Twilight and I was a fan of Buffy and.... the list goes on, and I only *JUST RECENTLY* realied I am indeed a Vampire Addict ;) ha ha ha ha
Posted by Mandy's Mind at 9:33 PM No comments:

TwiFans has found some GREAT new merchandise for the Twilight Saga ... Check out some of the goods she photographed (and hopefully purchased for herself ;) hee hee) at Twi-Con 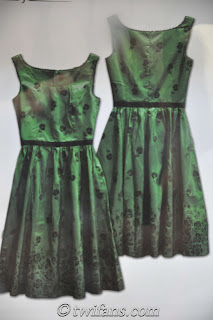 I *LOVE* the calendar thingie in this pic:

Seriously - there is *WAY* more go to TwiFans to check it all out :) 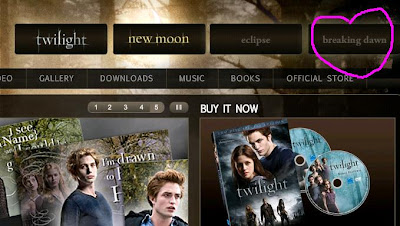 I saw it tweeted then checked my fave twi-news source TwiCrackAddict and saw - its true :)

They are filming together and look uuber sweet:

Just had the most hilarious night walk EVER with @selenagomez. I haven't laughed that hard in a long time.
12:52 AM Jul 30th from web

which a half hour earlier Selena Gomez tweeted:

Then....Taylor Swift the next day:

Spent all day with the other Taylor. Lots of laughing, lots of confusion over which one was actually being called to set..
7:41 PM Jul 30th from mobile web 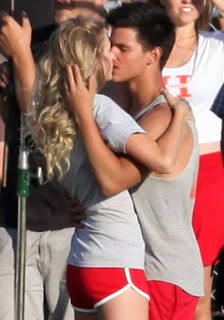 Just Jared Jr reports that Kellan Lutz is headed for beautiful BC.... However, he only has 2 bags and no passport out... so my guess is he is headed to Twi-Con in Dallas for his scheduled appearence.... Here is what Just Jared Jr Reports:

Rumor has it that Kellan and costar BFF Ashley Greene are headed back to Vancouver, British Columbia, Canada to film the third installment of the Twilight Saga series: Eclipse.

UPDATE: Another possibility of where Kellan is headed: Dallas, Texas for Twi-Con.


It is likely the later of the two suspicions.... LOL - still - the fact that Eclipse filming is nearing makes me *OH.SO.EXCITED*

He has an AA boarding pass and AA doesn’t fly Burbank to Vancouver. C’mon.

Gotta love the twi-fans dedication to details and research - it truly is what gets fans the photos and meetNgreets with cast :)

Perhaps Peter's tweets about rehersals in a week *were* implying rehersals HERE?!?! in VANCOUVER?!?!

(I tweeted that rehersals wouldn't HAVE to take place here, so... those people *ahem* tweeting that the cast was actually arriving here next week were simply assuming rehersals were here in Vancouver.. which may not be the case...)

I am hopeful rehersals will be held here, but as you all know, I am not one to jump to conclusions or announce mine or others assumptions without CLEARLY stating they are "best guesses"

I like to keep it real and so - with Eclipse coming, I hope, like when New Moon was here, that people turn to my blog for actual facts and reliable info....

Taylor is rumored to play Anne Hatheway’s boyfriend in the movie which is slated to be released in February 2010. Valentine’s Day also stars – Bradley Cooper, Jessica Biel, Jessica Alba, Julia Roberts, and Ashton Kutcher (to name a few!). However, Taylor is not listed as a cast member (yet!) according to IMDB . The movie is a Comedy about singles, couples, make-ups, break-ups, on Valentine’s Day in LA.

TwiCon, the first fan run convention featuring both the actors and fan panels, starts today in Dallas, Texas and runs through Sunday.

I very much planned to go to this - but funds were low at the time and hotels were SUPER PRICEY!!!!

The convention was featured in The Dallas Morning News:

“TwiCon 2009 has sold out, even at $255 a ticket. That buys attendees four days of access to serious-minded academic panel discussions (one is called “Your mood swings are kinda giving me whiplash: Twilight Fans and the Negotiation of Gender and Feminism”), Bella-themed self-defense classes, a TwilightMOMs meeting room, a fan fiction contest and (natch) a Red Cross blood drive.”

Plus, Eclipse comes to *ME* (yes, me personally, as in they come to Vancouver and stay at my house and film in my yard.... er... i wish!!!) soon.... so why spend all the money and time which I can't spare... when I may just have equal opportunities while they are chillin' in my 'hood!!?!?!

I hope everyone has a BLAST and I look forward to all the reports from my fave peeps who are there :) 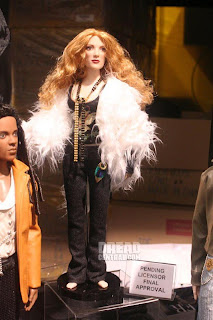 Victoria doll which is made based on Rachelle LeFevre's Victoria... not Bryce Dallas Howard, but - c'est la vie... 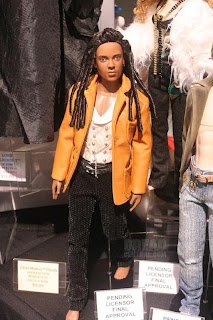 In this heat? A red cat suit? 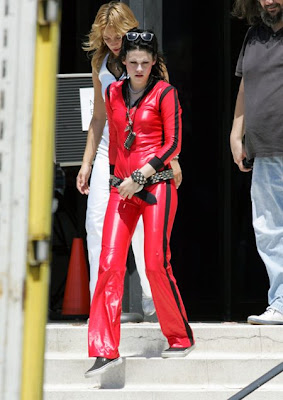 KStew should be finishing up The Runaways soon and heading up to Vancouver for Eclipse... can't freakin' wait!!! 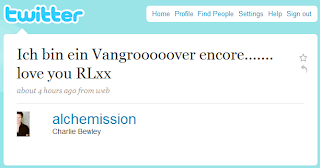 Clearly a Vancouver mention.... clearly support/love to Rachelle.... some kind of reference/inside joke to their time in Vancouver....

TwiCrackAddict's Post has some interesting comments regarding this including:

"Ich bin ein" translates from German to English "I am a".... Vangrooverer again??

It is a famous quote from JFK from a speech he gave giving his support to West Germany after the Soviets erected the Berlin Wall in the 60's. His quote was "Ich bin ein Berliner", "I am a Berliner". “I was stunned by Summit’s decision to recast the role of Victoria for Eclipse. I was fully committed to the Twilight saga, and to the portrayal of Victoria. I turned down several other film opportunities and, in accordance with my contractual rights, accepted only roles that would involve very short shooting schedules.

“My commitment to Barney’s Version is only ten days. Summit picked up my option for Eclipse. Although the production schedule for Eclipse is over three months long, Summit said they had a conflict during those ten days and would not accommodate me. Given the length of filming for Eclipse, never did I fathom I would lose the role over a 10-day overlap. I was happy with my contract with Summit and was fully prepared to continue to honor it. Summit chose simply to recast the part.

“I am greatly saddened that I will not get to complete my portrayal of Victoria for the Twilight audience. This is a story, a theatrical journey and a character that I truly love and about which I am very passionate. I will be forever grateful to the fan support and loyalty I’ve received since being cast for this role, and I am hurt deeply by Summit’s surprising decision to move on without me. I wish the cast and crew of Eclipse only the very best.”

Official reason is scheduling conflicts, but money may be a part of the problem, too...

First up, Lefevre got a hefty pay increase for the vampire franchise's third installment, according to sources.

Then she snagged a role in Barney's Version, an indie flick costarring Paul Giamatti, which she planned to film between the New Moon and upcoming Eclipse shoots.

But then, I'm told, Lefevre's Eclipse schedule with director David Slade was tweaked and overlapped with Barney's Version.

"Summit could have made it work," one source says. "But they saw that they could save a lot of money by recasting her. This could get really messy."

Hmm.... see, less than 24 hours later, our perspectives change... as I said on twitter last night... we don't know the whole story - but something is definitely FISHY!!! 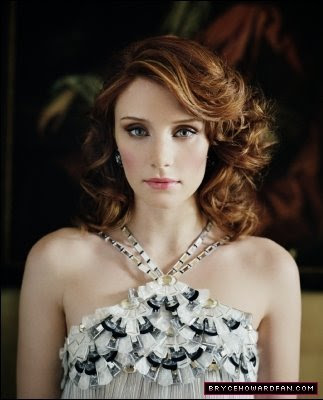 I was shocked and a lil upset when I first heard the news last night, that Rachelle Lefevre would not be continuing her role as Victoria in the third Twilight Movie, Eclipse.

After much thought, however, I think Bryce is beautiful and talented and will bring Victoria to life when she needs it most.

Not that Rachelle didn't... I loved that Rachelle is Canadian and I hate inconsistencies in series movies, but.... overall, I am simply excited to see Bryce as Victoria.

Top that with the less-than-fabulous encounters I have had with Rachelle (granted, she was having a bad day... and I have heard from everyone how fabulous she is)... I am not losing any sleep over this re-cast... maybe after seeing her in New Moon I will feel like she will be missed even more... but she had very little screen time in Twilight and honestly, from what I gather, New Moon will bemore her flaming red hair than anything else... but we shall see in November...

the petitions won't change anything.... once Summit makes an official announcement it is typically a done deal....

Maybe they'll even bring Bryce's daddy to direct the last movie?!?! ;) (Ron Howard, for those who are having trouble keeping up ;) tee hee)

I wish Rachelle the best of luck in her new movie, which I think will offer her a chance to step outside of type-casting and gain new fans outside the twilight realm. 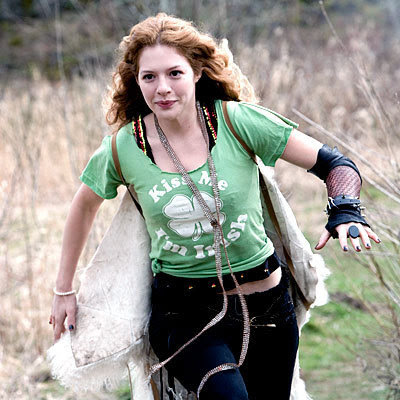 THE TWILIGHT SAGA: ECLIPSE, the third film in the studio’s TWILIGHT film franchise based on Stephenie Meyer’s blockbuster book series, will be directed by David Slade from a screenplay written by Melissa Rosenberg. The film will be released theatrically in North America on Wednesday, June 30, 2010.

“We are incredibly happy that Bryce has agreed to come into the franchise,” said Erik Feig, Summit’s President of Worldwide Production and Acquisitions. “Rachelle brought “Victoria” to great screen life and Bryce will bring a new dimension to the character. The franchise is lucky to have such a talented actress as Bryce coming in to fill the role.”

Howard most recently starred in TERMINATOR SALVATION as Kate Connor and has been seen in SPIDER-MAN 3, LADY IN THE WATER, and THE VILLAGE. She was nominated for a Golden Globe for her leading performance as an actress in the HBO film AS YOU LIKE IT.