Today was insanely busy. I could summarize all the panels but I know people who were here heard it all, those who weren't watched live feeds or tweets, so let me keep this simple for now and just share the goodies we all love - photos! 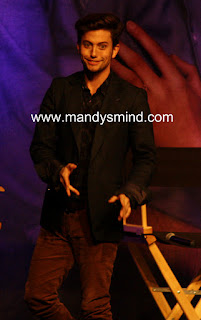 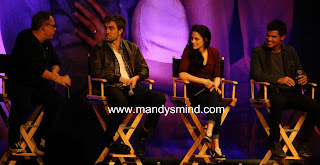 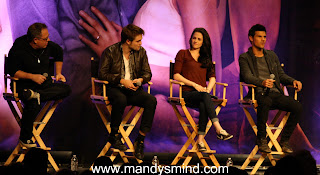 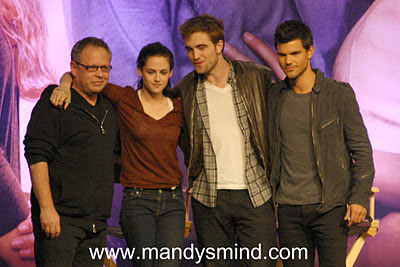 *Please do not remove tags and link back if you wish to use photos
Posted by Mandy's Mind at 9:46 PM No comments:

I tweeted a few pics and RT'd a few as I was not in the theatre much of the evening.

A group of us went to Pink Taco for dinner then returned to join everyone for karaoke.

We arrived and Mia Maestro was just leaving after an hour, Tinsel Korey however was still there and is actually still down there while I type ha ha she is awesome!

Was a great day to see old and new friends in the Twilight community.

Sorry there aren't a lot of photos today.... tomorrow is the "BIG DAY"

Here are some karaoke pics from tonight: 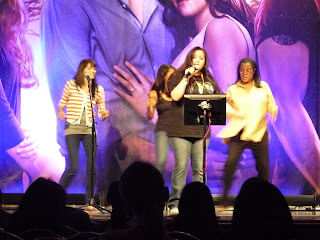 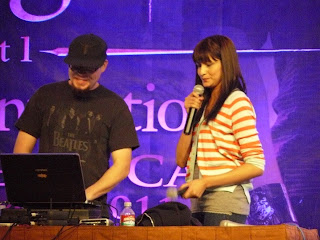 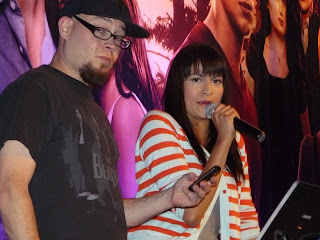 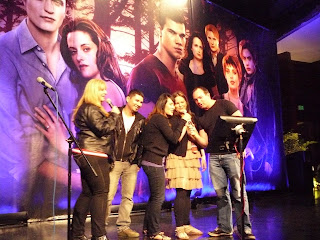 The unofficial line began last night after Kimmel. Yes some stayed out all night. Others tried to follow the rules and arrived at 6am. Those who followed the rules did not get inside. Those who broke the rules (camping overnight, joining friends in line, etc.) had better luck as the first 100 fans got wristbands and were admited in the fan zone behind / beside the cement ceremony.

The rest got a fan zone on the street, which actually had some better angles.

I was in the fan zone and got a lot of photos of the guests arriving ...

During the actual ceremony, however, we were blocked byb security and couldn't see very much. I have a few so-so shots I will put on facebook but here is the final product..

The best part of being the first 100 in the fan zone was that the cast came to sign items. I never have items, I shoudl have, but I took photos anyways. I have way more on Facebook - Mandy S Mind.

Rob spent the most time with fans, Kristen was a close second, but was sick and she didn't have her brace on her hand (obviously she couldn't for the cementing) but Taylor only saw the first few fans and then disappeared. Not sure why/what happened.

Overall it was a great experience. Afterwards, we whipped over to Jay Leno to see a fantastic interview with Kristen Stewart - don't miss it tonight!!!

Also check out twitter and facebook for more of my pics ;)
Posted by Mandy's Mind at 7:18 PM No comments:

So I arrived late due to fog in Seattle but I had an awesome shuttle driver who was really sweet and as her only customer she got me to the hotel as soon as she could given the traffic.

After a quick relax, my roomie and I taxi'd to Jimmy Kimmel lot to see a long row of fans barracaded up out back.

I had friends in line and friends inside but I was so tired and wore out I just didn't feel like waiting in line because I wasn't sure he would come out and if he did I doubted he would do the whole line.

Anyhow, I visited with some awesome people and then Ellen and Porsche  Portia came by and took some photos with the first few fans in line.

I decided to go sit down on the stairs at the back of the building so if Rob came out I could snap pics of him with fans. I have met him numerous times and I didn't want to take away from other fans opportunities, nor did I have the energy to stand and wait and hope.

So, there I sat with my borrowed super long lense camera and three security came out, they barely glanced at me and i showed them the size of the camera and said "I am not going anywhere trust" ha ha they let me be.

One crazy fan (apparently she is a paparazzi from Quebec?) started shouting that security should do their job and move the crazy Canadian behind the barracades HA HA man I almost forgot how craycray Twi can get... the security ignored her, thankfully.

Soon enough Rob came out with Dean and several other security. I stayed true to my word and sat across the alley snapping pics of Rob with fans. It was pretty dark and his back was to me mostly but the squeals of excitement and the smiles and flashes of light was exciting.

Anyhow, at the end there were no barracades and fans began to swarm. Dean got that look in his eyes like it was time to go but Rob kept pushing to keep going and get as many fans as possible. A young boy rushed forward and was quickly stopped.

then it really was time to go.

I got this pic just before Rob was escorted into his vehicle and whisked away.

I wasn`t inside but friends were and said that some highlights included:

-Rob saying the baby was mechanical and a mix of Rob and Kristen`s faces
-Baby looked like a "canerous owl"
-Sex scene was R-rated but brought it back, something aboust just using "the tip"

Hope to see you out & about

Hey, if you want to stalk  meet up with me while I am on my adventures, here is how:

Currently I am at Seatac with a delayed flight... I will get into Cali this afternoon and after checking in tot he Hyatt probably sswing by Kimmel to catch a glimpse of Rob if I can. Just me a hundreds of other fans I imagine.

Tomorrow I am going bright and early for Grauman's which will allow line-ups starting at 6am. I won't break the rules and go earlier, but I will hope it is run well and all fans get a chance to see the ceremony.

After that I am heading to Leno to see Kristen Stewart. I requested tickets before guests were announced and am pretty psyched it worked out this way.

After Leno we may swing by Kimmel as Kstew is going from Leno there.

Then it's Cretion's official breaking Dawn Convention all weekend.

I will be at the Hyatt til Sunday evening so if you are at the con or any of the above activities look for me and say hi!! I always leave these big events sad I missed out on seeing or finding people I want to meet and see.

Then Sunday until Wednesday I am staying with a group of gals in a cheap downtown motel. We are all hitting various different events over those few days including Leno, Kimmel (I will be there for Taylor Lautner) X-Factor and maybe even some Price is Right tee hee!

Wednesday I move in with a different group of gals to a different hotel at LA LIVE and we prepare for the Premiere Camp-Out. I am so excited, this is my first camp out for a Twilight Premiere, well, any premiere really (except WFY NYC but that was brutal rain and cold and I prefer to pretend it  did not happen because it just about broke me!)

Anyhow, after the premiere I head to NYC and get to see another group of wonderful gals that I adore and we have a few things planned including the screening for Breaking Dawn and the midnight release and of course everything New York that is fun

Tweet me if you are around at any of these and hopefully we can meet up for a hello, a hug, a drink!!!

I am off, it is 5am and I am headed to catch the shuttle to Seatac which will take me to LA to begin my travels.

I promise to blog as much as I can and tweet a lot also :)