Twilight Lexicon reports that Summit will soon be launching their New Moon Myspace...

Among the features will be the ability for viewers to switch between the Twilight and New Moon movies by easily clicking on a tab rather than jockeying URLs. Initial content will include the trailer, with other items added as the movie draws closer.
Posted by Mandy's Mind at 2:56 AM No comments:

Rob and the lil girl filming... adorable (im so jealous!)

I want to be, or have my daughter be, this lil girl... 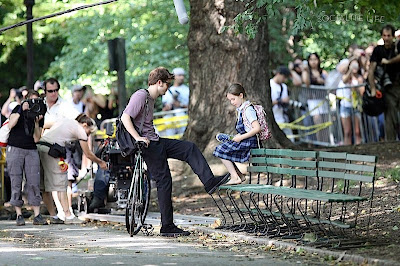 Imagine being "stuck" with Rpattz all day in Central Park in NYC filming... oh my!

Esme - i mean - ELIZABETH - looking beautiful as ever

It is $16 and Can be purchased thru DuWop

Not something I would buy, personally... 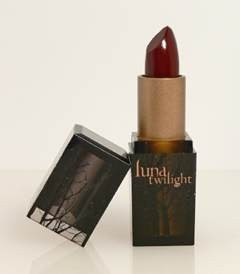 LunaTwilight is the more luxurious of the two offerings -- the packaging is heartbreakingly gorgeous and the formulas are more sophisticated than the alternate collection.

I hate to tease you with some of the the product names before they're available, but let's be honest, I can't help myself and you can't wait: "First Light Body Glow," "Mortal Glow Blushing Creme" and Color Palettes in "Bella," "Rosalie," "Alice" and "Victoria."

Then there is also the Volturi Line:

The Volturi family crest appears on the packaging and some standouts include "Deity Body Lotion," "Immortal Body Shimmer" and "Crown Mascara".

Everything I've seen can only be described as elegant and wicked.

Twilight Beauty will be available on its own site: TwilightBeauty.com, which isn't live yet and an official launch date for the products has not been announced (though, it looks like it will be timed around the movie's release), so stay tuned.

Apparently the cast wore this make-up on set...READ MORE HERE

I know a lot of fans will buy this, and I know anyone who markets anything Twilight related will make A LOT of money.... but I am not a pricey make-up girl... I let my make-up artist friends do me up once in a while, but otherwise do my own stuff with whatever cheap bright stuff I have around the house.... just me....

Taylor's been busy, after gracing us on the red carpet and MMVA's in Toronto, he has been spotted looking hunky as ever all over the place... 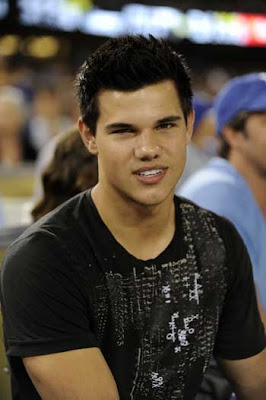 “He sat in the front row of the baseline box section with five other guys,” says one onlooker. “He seemed to be having a great time.”

Though there were other stars like Jimmy Kimmel and Zachary Levi cheering on the hometown team, the young actor got his fair share of attention.

“He was really nice when these young girls came over, signing autographs and posing for photos with them,” the onlooker. “He was totally nice.”

It seems like everyone was a winner that night! The Dodgers went on to beat the Colorado Rockies 4 to 2 in extra innings. 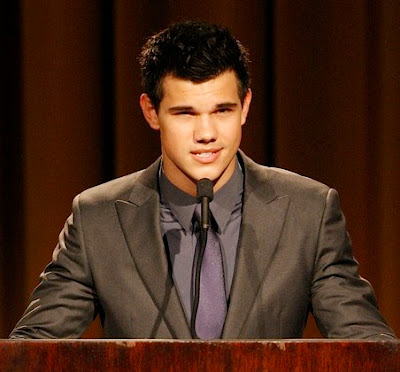 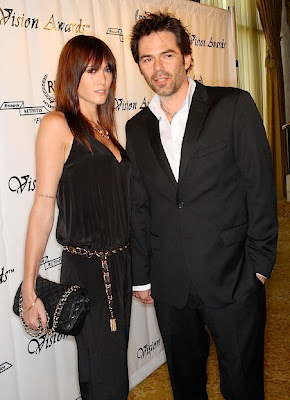 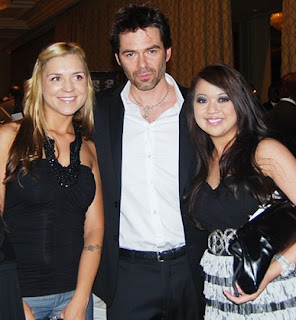 These photos had me wondering... so I looked around a bit... and Bella's dad can be damn hot.... And he has a nice resume too

Only *I* Can find the 40-something dad, 20-something boyfriend, and teenaged best friend of a movie *ALL* sexy.... sheesh!!!

It may have been the number of cocktails consumed, but it was really challenging with strange rules and a lot of dice rolling math. Besides some of the uuber easy questions.... Some of the trivia was *WRONG* - - - yup!!! True Twi-Fans will catch these errors....

Anyways, I am much more excited about this game: 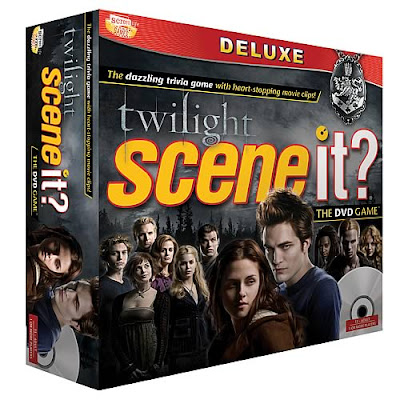 This one I will defo get, I have Disney Edition and a few others... although my new fave is the XBOX 360 version.... I love Scene it and I love Twilight sooo....

Also, after (again too many cocktails) ladies night Friday with Pocket Edward, I have decided i *MUST* get one to hav ein my purse at all times.... everyone has a pocket edward for their adventures and I think I need one to share my life with ;) Well, we already knew this - but it was officially announced....

I found this via TwiCrackAddict 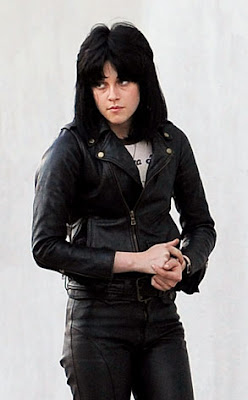 The rocker gave Kristen Stewart, who plays a young Jett in the upcoming biopic “The Runaways,” a hard time last week, causing the young starlet to burst into tears on set.

Says an insider, “Joan just wants Kristen to play an authentic version of herself, so she needled her a little bit too much. But she apologized when she realized how upset Kristen got.”

At least there’s no bad blood between the two. Says our insider, “They’re like mother and daughter now.”

What do you think? Truth? Either way - I am anxious to see the film, I truly think (as if you haven't heard me say it a trillion times) KStew will do an AWESOME job in this role!!!

The show opened with a bang I especially enjoyed the dancing in the water....

Nigel's speech about the death of MJ King of Pop def. dampened the mood, but I have to say I am glad the show still went on.

Bottom Three Couple... I predicted 2/3 and I was not shocked that Asuka and Jason went home.

Musical guest: “Take Me On The Floor” —The Veronicas
Guest dancers: The Rage Boys Crew: “Feel It”—Colby O’Donis and Mauli-B

These kids were incredibly cute.

-She went home, so it wasn't fantastic, obviously.

-I enjoyed the dance

-If Twi-Fans were choosing the winner they would have picked her, simply due to the song... even my daughter said "THIS SONG IS ON TWILIGHT!!!!" Besides that, her dance was pretty awesome!

-He went home, his dance was a bit frantic and too much acrobatics

- Amazing routine, she was stunning, shocked she was in bottom 3 couples.

-I enjoyed his routine, I was shocked he was in bottom 3 couples
Posted by Mandy's Mind at 1:17 PM No comments: