EXCLUSIVE: Robert Pattinson has booked his first major lead for when he completes The Twilight Saga. Pattinson will star in Cosmopolis, the Don DeLillo novel adaptation that David Cronenberg wrote and will direct. Pattinson, who just starred with Reese Witherspoon and Christoph Waltz in Fox 2000's Francis Lawrence-directed adaptation of the Sara Gruen novel Water For Elephants, will play Eric Packer. A financial wunderkind, Packer risks his entire fortune to bet against the yen on a tumultuous day. His deed puts him in the crosshairs for assassination in a drama that is a study of capitalism in a slightly futuristic metropolis. Most of the scenes in the book take place in the limousine that transports Packer from place to place. Marion Cotillard and Paul Giamatti are also reportedly doing the film, but those same reports had Colin Farrell poised to take the lead role.


Other buzz is that Colin Farrell backed out of this role to do Total Recall. Also, it is said that Cosmopolis will film in Toronto as early as May, once Breaking Dawn is finished.

In the film version, Packer is described as "a financial wunderkind," who risks his entire fortune to bet against Japan's yen on a tumultuous day. His chancy move puts him in mortal danger. The flick is said to be "a drama that is a study of capitalism in a slightly futuristic metropolis."

The novel is a modern reinterpretation of James Joyce's classic "Ulysses," set in New York City in the year 2000, around the burst of the dot-com bubble. Most of the action in the book takes place over the course of one day, in the limousine Packer takes to his various errands.

Other stars rumored to have signed up for the project include "Inception" star Marion Cotillard and Paul Giamatti. Deadline reported that Pattinson wanted the role because he is a big fan of Cronenberg's work and an admirer of DeLillo's books.

Lot's of high's and low's... see my twitter for live tweets while I watched...

Here's the big win at the end for Twilight Trio:

Queen Latifa, as host, got up close and personal with the three and called them by their character names, asking silly questions like if Bella would go for zombies next. It was pretty fun and the trio seeme only moderately uncomfortable, which for them is pretty good LOL Here it is:

Screen caps of their big win:

People's Choice Awards will have all the stars in attendance:

Front Row is said to heave our Twilight Trio: 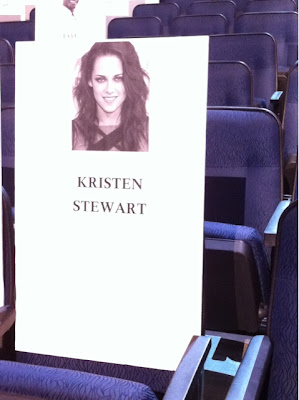 I wonder who else will be there? And just how many awards will Twilight pick up?

Back to Work on Breaking Dawn

According to cast tweets there were some "big" scenes that involved fake snow... thoughts?

Some believe the battle/encounter while others are saying flashbacks and flash forwards (predictions etc) The easiest way to "test" this of course is to consider which cast is in town, what they tweet and then compare to scenes from the books.

I know they only have a few more weeks in Baton Rouge so I wonder which scenes they have lined up? More importantly which scenes will be filmed here in Vancouver?

After a break for the holidays the cast headed back to Baton Rouge for filming. Many were photographed at airports heading back to work.

And now back in Louisiana, some fans have bumped into cast out and about:


I am excited that we will get two more movies out of these Saga, but the wait is killing me... at least New Moon and Eclipse was fairly quick, this two parter dragging on and on is making me impatient... just me?


[Various Sources]
Posted by Mandy's Mind at 9:01 AM No comments:

I love this photo - it is so serene and awesome.... Water for Elephants will be amazing!

Rob & Kristen share a NYE smooch on Isle of Wight

A NYE Kiss between Rob & Kristen? Perhaps - sure looks plausible - but either way - adorable that they spent NYE together with some of their closest pals - I spy with my lil eye - Sam Bradley, Tom Sturridge who else?


I have never made any comments here before but felt I should as I was there. The Lobster Pot is our local pub and we go there every New Years Eve, we saw Rob and Kristen last year and when they came into the pub
they looked over and said hello as though they remembered us, (I doubt
very much they did) but it made us feel kind of nice. Anyway, they are
kissing, it didn't last long but my friend and I both sighed. Trouble is
I think now the papz have got wind of their destination, I don't think
they'll come back. Apparently the police were called at another place
they visited because about 300 fans and dozens of photographers had the
cafe surrounded. They are such nice people, no airs and graces at all
and Kristen, despite all the bad press is so friendly. Rob said, see you
all next year, before they left. i just hope they do.

TOo cute for words right?