This morning I woke up early to tweets, texts and calls about a "premiere line" that had started at LA Live and then moved off property tot he west parking garage.

Upon further investigation there was indeed about 20 people some had camped out.

I went to go check it out and saw security walk up and the girls all hide their faces and face the wall and not look. Rumours that Summit were taking names and photos to black list people had emerged and these ladies were not wanting to take the risk.

Soon after the line dispersed, so that makes 3 lines that I know of that Summit has brokenm up.

I had some coffee from Starnbucks, chatted with friends and then went back up to my room to get ready for X-Factor.

I have to be honest, I have been waiting for X-Factor eagerly this week.... we went to In & Out ( I was an in & out virgin til today - it's true! and I must say it was a glorious cherry popping experience ;) ha ha) then went to line up for x-factor.

I won't draw out this part of my day - we waited for hours and were given theimpressionwe would get in - and then they reached capactiy and were sent home - - - after hours and hours of standing waiting - - - fail!

So we took a public transit BUS back to LA Live to see aprox 100 fans mingling around LA Live plaza in groups of 2-10 each. No one in line, no one rushing any spot, just milling about.

I had this uneasy feeling in my stomache, I was already so pissed about x-factor, I remember my only movie premiere experience was WFE NYC and it was horrible, so I am starting to have severe anxiety over this premiere - once everyone is in or not in and wristbanded or not I think we can all enjoy the experience - but until then everyone is on high alert and I feel this sense of panic and anxiety!

Anyways, I went up to my hotel after chatting with friends - literally so many people I know here - so cool!

I showered, talked to my family, who I miss so much - seriously homesick :( then came down to blog in the lobby where I can get dfree wi-fi

the day is not over, i anticipate a sleepless night as people panic and do false lines and mad rushes to nothing and endure security's endless talks about "how it will be"

Not many pcis today but I will put them on Facebook - - scroll down for Tuesday's blog that I was late posting....

Wish you were all here!! (I know many of you are)

PS - I have some special presents to hand out to tentcity tomorrow night ;) stay tuned!!
Posted by Mandy's Mind at 8:41 PM No comments:

Tuesday was yet another busy day. We woke up and I packed up and moved to my new hotel and new roomies. But, I wasn't done with the old roomies yet - we went for a trip to the Grove. Extra was taping Nick Lachey and Kellan Lutz (it should air on Friday) it was pretty cool to see them tape the show right in the middle of the plaza. 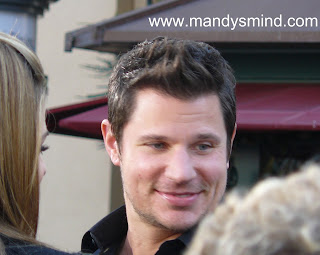 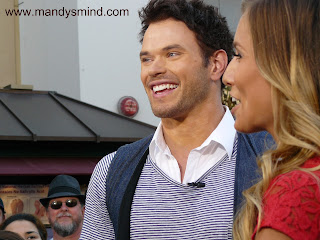 Then we went to Cheesecake Factory and had horrible servers. When we complained the server came up to our table to try and question us on why we complained and got really defensive ha ha ity was mildly amusing.

That night we decided to go see New Moon for Twilight tuesday which was awesome because they did a ton of interviews and stuff with the cast before, plus watching with a ton of Twilight Fans who have all seen the movie was hilarious.

Erik Odom and Jack Morrissey joined us at the movie and we had a lot of photos and chatter afterwards. 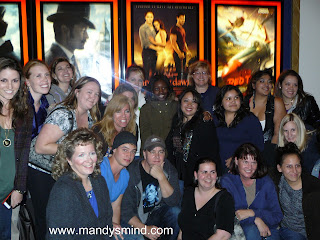 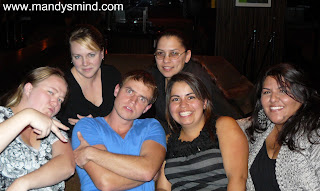 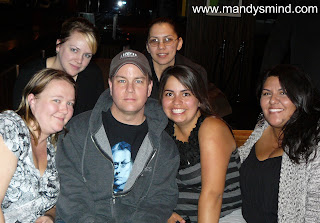 I have more photos of everyone on Facebook (Mandy S Mind) if you want to check them out....

Today was yet another adventure in L.A.

We slept in and then we went to Hollywood for some lunch and shopping before lining up for Kimmel.

A few were chosen to wear Team Herman and Team Jacob t-shirts, one of our group was included so in the opening you can see me on tv tee hee. (Notin a shirt, but beside them)

Things got all messed up on Kimmel. We started way late and had to endure the opening warm up guy for way too long and see audience memebers attempt crazy tricks to win a t-shirt. I should say after the first so-called-talent I felt I might as well go for it and did a Xena yell/yodel to earn a shirt. There was one gal who could beat-box but the rest of us were talentless.

Some guy actually said he was the best kisser so they made him kiss an elderly lady, then theopener kissed her and she voted on him over this young buck who was too cocky.

Anyhow, eventually we got started, Jimmy Kimmel was noticably irritated and we had to tape out of order because of Herman Cain being so late to arrive (maybe because of his sex scandals)

Anyhow, we taped his interview first, it felt fake and forced but was fresh given that he was accused (again) this morning by WOMEN #4 (who had a name versus anonymous gals #1-3)

ANYHOW after taping him talk about pizza, accusations of sexual harrassment, and politics we taped fake intro's to a band we never actually got to watch (juniper)

then finally Taylor came out and did a short segment which was pretty awesome, he talked about the Grauman's hand print ceremony, the twilight convention and the twi=mom panty story.

Then we went out back and got somepics of Taylor before heading to the Immortals Premiere.

Unfortunately because of the delay taping we did not make it for the red carpet or to go inside. We did arrive in time to see some friends, have some dinner and then catch some celebs after the movie.

I have to say I am not a fan of the L.A. autograph hounds... I mean in Vancouver we have a handful and they can be nasty or mean, though mostly to each other, overall they are not bad, some are even super cool.... but these guys tonight - they were cruel. At Kimmel I saw a guy push a kid over to get multiple Taylor autographs, then at the Immortals lot there were a ton of them pushing and shoving. I pushed back of course ;) but I got quite upset at the way things were going on and felt frustrated that the hounds were at front getting most of the pics and graphs while fans were pushed, shoved and tossed aside... ah well, clearly I am not aggressive enough...

Anyways here are some of the photos I did get :) 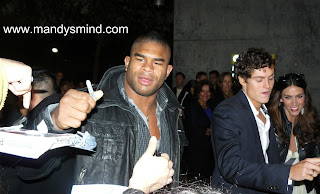 We saw many more celebs, some I got photos, some I did not - it was pretty insane with the few fans and ton of autograph hounds.

I have more photos up on my Facebook - Mandy S Mind

Tomorrow may be the Grove or Price is Right or Ferguson or sleep all day... ha ha

More from L.A. - Wrapping up Convention, Hollywood and more

Last night was the "Wedding Reception" where Booboo, Charlie, Mia, Christian and Tinsel came to hang out with fans.

Once again Booboo and Tinsel showed their committment to fans staying quite late. Mia disappeared early on again and Christian stayed quite a while chatting with fans. 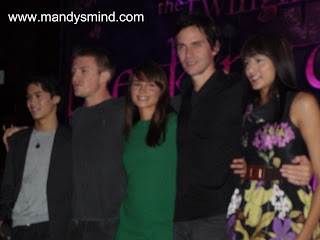 I had a great conversation with Christian Camargo, I totally love him! We chatted about Whistler, Vancouver, Olympic Village, Dexter.... gah!!! I also got a photo with him - totally amazeballs!

I also chatted with Charlie about Vancouver and skiing. Then this morning was the breakfast, a lot different than usual. Charlie had to catch his flight so he did a quick autograph and no table circulation. 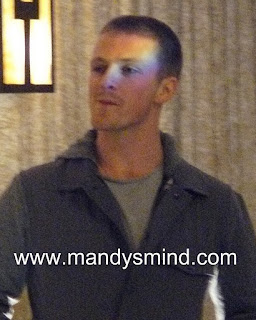 Alex, Christian and Daniel, however, did the rounds at the tables and then autographs.

Daniel was sweet as ever, we chatted about bars in Vancouver and how he was wearing a poppy to represent Canada.

Alex was cute and cocky as always, but super sweet. We talked about Vancouver, in particular Coquitlam where Jacob's house is (for the films) I told him some history on that land/area and he shared some fun filming stories.

Christian bumped his leg on our table when he went to sit down. We had a brief chat, I stayed mostly quiet because I had chatted with him for so long last night, but a friend at the table said to him that I was a huge Dexter fan, and he said he knew and reminded me what he had said the night before... Stay tuned for more ice truck killer on dexter... *squee* 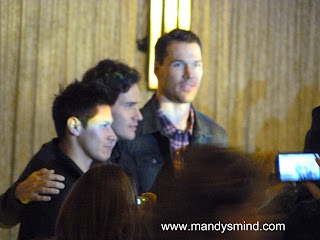 After autograpsh (I got a double of Daniel because one was for my roomie Juaan who sadly had to leave to catch her flight) I met with new roomie Lisa and we took a cab to our new hotel... it sure isn't the Hyatt ha ha  ! Then our other roomie Dez joined and we went to Hollywood for the Marilyn Monroe movie premier red carpet. We missed Emma Watson but saw Michelle Williams (barely)

Right after was the BUTTER premier at the AFI Festival and we saw some more celebs as well as some convention friends. Here are the red carpet photos for Butter featuring Jennifer Garner and Olivia Wilde.... 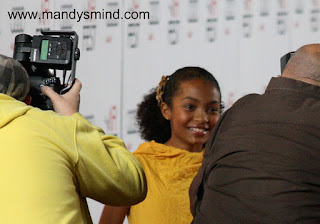 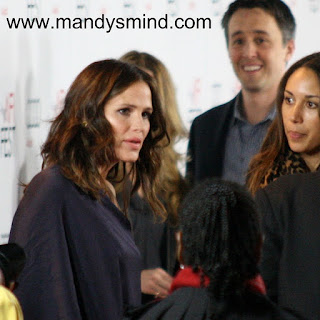 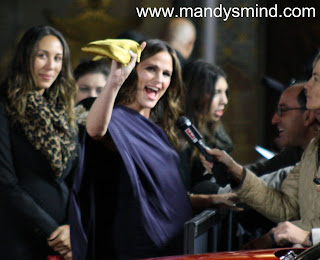 It was awesome because we called for Jenn and she waved to us mid-interview... Olivia Wilde arrived quite late and did the carpet very quickly. Ashley Greene, Hugh Jackman, Alicia Silverstone among other cast were not seen by us. Not sure they attended.

Then we went to eat at Hooters and used our 4square check-in to get free appies - score!

Then we went to the AFI people and won tickets to the advanced screening of Haywire.

I am, as many know, a MASSIVE Channing Tatum fan, sadly he wasn't there because he is filming, but after the awesome movie there was a Q & A hosted my Joel McHale with director Steven Soderbergh, and actors Ewan McGregor, Gina Carano, Michael Fassbender. 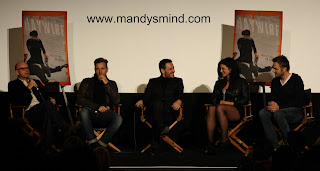 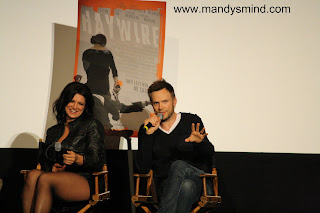 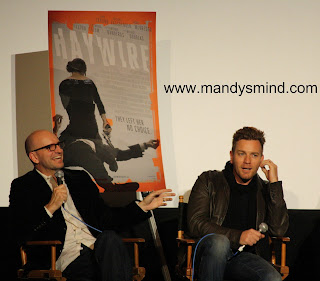 After that we tried the Metro and found it super fast to get to our hotel - SCORE!

Now it is ZZzzzzz time as tomorrow is another long day with Jimmy Kimmel to see Taylor Lautner as well as the Immortals Premier (no I amnot doing both, the cloning experiement failed unfortunately)

Wish you were all here - Having a blast!