After an amazing trip to L.A. for Hunger Games, 21 Jump Street and Channing Tatum, i am heading home. I am so thrilled to have had all the awesome experiences I did and meet so many great new people. (OK, and some losers, but whatever!)

I have a ton of blog drafts I started and will work on and post asap. Hunger Games movie stuff, premiere stuff, Channing Stuff, other celeb stuff... stay tuned!

I have postd a lot of pics on facebook: Mandy S Mind 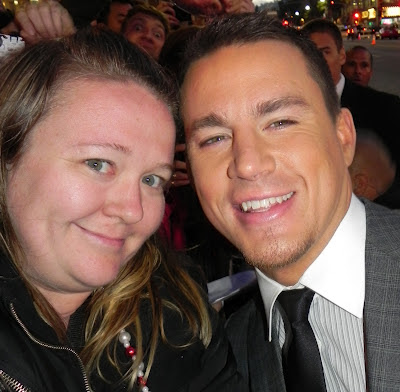 At the 21 Jump Street Premiere he came across the street to greet fans. (As did many other stars but that is a different pst - later)

When I saw him I was shaking with excitement. As he crossed the street I felt giddy inside. I kept hoping he would keep going down the line to where we were.

When he got to me we took a photo then I said I had come from Canada and had been hoping to meet him for a long time. I told him I had planned to go to see him in NYC for SNL but didn't make it. He said thanks and asked my name... I told him Mandy, he said "thank you do much Mandy" and grabbed my hand... held it.. smiled.. omg... I died. T

hen as he moved on to the next person I said I hoped to get an autograph Thursday at Kimmel and he paused (probably confused thinking I meant he forgot to sign for me just then, then realizing I had nothing to sign and processing what I actually meant, which was I would bring something Thursday... at least hopefully that is what went through his brain and not LMAO)

He was so nice!

The security was nice also. When we were packing up to leave he told me and the people I was sitting with (Who are regulars) to hold on. He then checked about tickets for us - no go, it was full... so sweet of him though!

Then he toldf me where I could go to see them at the after party, which was Rolling Stone just around the corner. I came back to rest and drop off some stuff then went back out to have dinner with my new German friends.

After eating we went by Rolling Stone and autograph hounds were there. They were fairly friendly but I knew that would change as more showed up and the dominated the barricade. I asked a security if we should go to the other side or what and he said he would if he were me. I agreed.

THEN the security guard told publicists as they arrived which side were the "real fans" and they came to us first :)

Got Channing again, got his beautiful wife Jenna (yes I still am jealous of her but she was so sweet, chatted a bit with me too!) and I also go Jonah Hill. I got so many celeb photos coming and going from that after party - I will do a post with all the people at the premiere and party but right now - it is allll about Chan - the man!

So then after what felt like a very short time, celebs were leaving and Channing came over again - I didn't ask for another photo as new fans arrived and I had him twice - but i did talk to him again and Jenna and my Germany friends got pics with them this time :)

So we all woke up and tore down by 6am.

We had been told to stay where we were set up and they would assign us numbers to dictate when we are to return for the red carpet.

As per usual, people panicked and some started to form a line.

Then everyone joined that line.

I asked security if we were supposed to line up and if not could they announce that so people knew what was going on (typical communication fail) but he said "you are supposed to stay where you were, but I can't tell you all what to do"

So I stay with our supplies while a friend stays in line - to have our bases covered....

I go join the line with my friend and we get processed - except they hand out RANDOM #s.

They assured us once we were inside the red carpet area we could go where we wish, but having been inside the fan zone before, I know it is difficult to try and move around - people pick their spot and hold tight.

Regardless, I keep telling myself it is a small number (400 or so right?) so regardless of ticket 5 or ticket 500 we should all get in and have a good vantage point in which to see everything - I hope.

I shall tweet as much as I can during the carpet but mostly tonight once I get checked in and/or tomorrow when I have some spare time (understandably I may be exhausted tonight ha ha!)

Stay tuned to twitter and I promise to get some great photos for you all :) Cheers!

I arrived to Long Beach yesterday and after a ride in a cop car (my friend locked her keys in her trunk and the cop drove me to her to try and help) we went to Target so I could grab some supplies, mainly a chair, then to a Mexican resturant for margarhita's and burritos :)

Surprisingly there were only about 100 people there and I ended up being #97 after a very painless process.

We got into the hob and set up. It was calm and pretty straight forward.

The whole day was awesome, we had some freebies and food and a lot of cast came to do autographs and photos - I put a ton on facebook - if you don't have me added search Mandy S Mind so you can see. here are a few pics for now - more in a day or two when I have time to write and share instead of being rushed at a Starbucks ha ha

Here is Josh & me chatting:

Tomorrow is the Premiere - we are guaranteed red carpet and to go see the movie - CAN'T WAIT!!!!!!!

My amazing friends did this for me in Florida.... They know how BAD I want to meet Channing Tatum - how sweet are they?

Thanks Cindy, Steph and Kathryn