Yes, I am late to hop on board, I have heard of this show but I really am not *usually* a vampire fan.... I mean pre-twilight, I could care less, and even post-twilight, I felt like Stephenie Meyer's creation was - unique....

But I saw it on hbo a few days ago and pvr'd it. Today I watched it. S2E2. I LOVED IT - So this evening I have been watching online from various sources (my computer is so crappy, it can't handle torrents or downloads) and I am just LOVING the show.

Anyways, If you haven't checked it out - you may want to - I didn't think I'd want to watch something about vampires, afterall, my love is more for Edward than vampire-life.... but this.... much more adult, scary, creepy, intense, awesome!

It was a fantastic Ladies Night Last Night.

Soon the crew arrived and we had about 10 ladies there including some familiar faces and some new faces (I always *LOVE* meeting new ladies with the same interests as me :) so great!!!)

Marina pulled out pocket edward and I have to say it was *ALMOST* as exciting as if RPattz had sat down at our table.... and def. more fun... (let's face it RPattz may have said hello, pocket edward obeyed our every request LOL)

There were more photos but I will let individuals have them and tell me if it's ok to post them - pocket edward got *ALOT* of action ;)


We had some dinner (I had the very yummy penne pesto) and several martini's and laughs later we walked down the street to Tinseltown Theatres (Only theatre in Vancouver playing Little Ashes) and met up with some more friends. We took up an entire row at the theatre

We got settled for the movie, but not before posing with the movie poster ;)

Again, I have more but will save embarassment of others ha ha ha - I don't mind embarassing myself, it's kind of my thing LOL ;)

The Movie itself has been said to have a slow start, however, I really enjoyed the details in the start. By far, half way through it got more exciting right up until the end. I believed it was the story of Salvador Dahli's life, when in fact, it was the love story of him and Frederico Locra.

There were several moments of pure passion and devotion expressed in both actors and I really became attached to the characters and their love.

Robert did an absolutely STUNNING job as Dahli, especially when he started to go a bit crazy.... I really loved it and it proved to me that the vampire type-cast can't stick, because this man has some serious diversity inside him.

I have to say i shed a tear or two during the movie, and there were a couple scenes that shocked me (one word... eyelid!!! oh and also "self-service") but overall, an amazing film that I would see again and recommend to not only Robert fans, but Dahli fans and film fans...

The ocean scene was one of the most beautifully passionate scenes in a movie that i have seen in a while.

FYI - the tuck scene was longer than i expected and still caught me off guard....

I really enjoyed it and I think others will too, although it's def. a certain acquired taste of film.

Anyways - Afterwards some departed and a few of us went to Natalie's apartment patio for drinks and more laughs.

Overall a fantastic evening with the ladies :)

Thanks to everyone who came and to those that didn't or couldn't - - - I will def. have another get together planned VERY soon!!!

Email ThisBlogThis!Share to TwitterShare to FacebookShare to Pinterest
Labels: music, opinion, routines, so you think you can dance, sytycd5, top16

I Won't Be Buying a Twilight Doll... Shopping as a Twi-Fan

But if you want one...Mattel has Edward and Bella coming this October for about $35 each. Also they plan to create other Twilight characters in the near future. Of course we already know about the Small Action Figures of Bella and Edward for about $16 Of course every good Twilight fan has all the books... hard cover... ;)

With the movies coming out we get new book covers - New Moon's was released and I like it quite a bit, in fact, I wish it had been the movie poster!!!

They just released some new Twilight products such as purses, shirts, back packs and more... as well as New Moon gear which is just coming in - - - awesome!!!

Remember Me Kisses from Robert.... 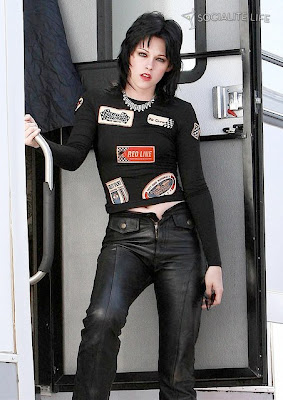 SO many people are *NOT* fans of her mullet... but as my friend Crystal always says "It's business in the front and party in the back"

And the clothes are *SO* fitting - again - I'm a HUGE fan or retro-wear, even the absurd! 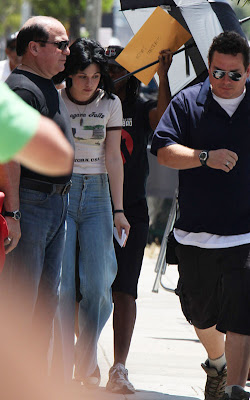 I can't wait for this movie - I think this is her PERFECT role!!! 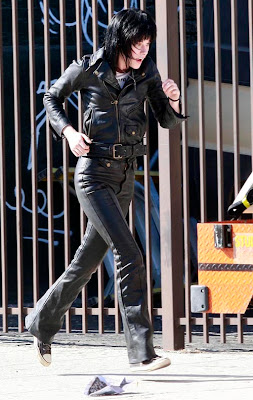 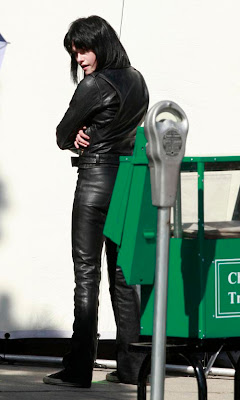 Dakota is also looking the part 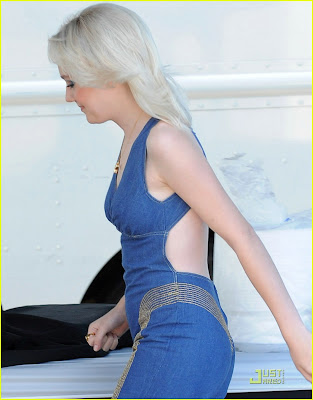 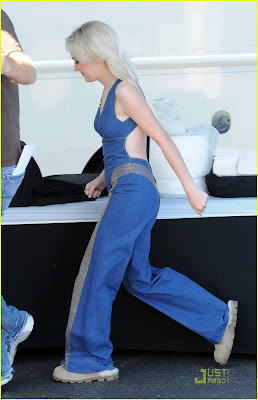 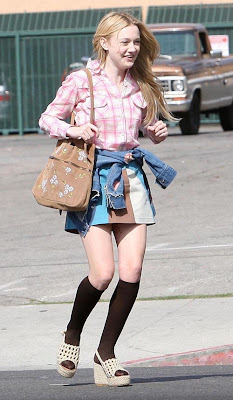 And here she is with the REAL Cheri Currie

I tweeted last night and I meant it - Bring RPattz back to VanCity ;)

I wasjoking however, about how NYC is out to get him... although it is funny since he has been there he has had a fan choke him/attack him as he walked, a taxi almost hit him, buildings collapsing around him.... unsafe.... bring him back here so we can protect him ;) 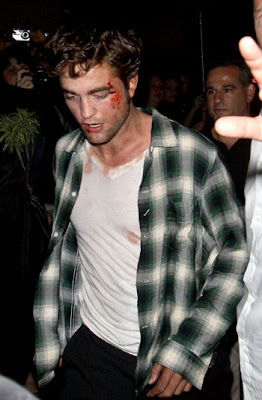 Thank goodness this is just make up eh? 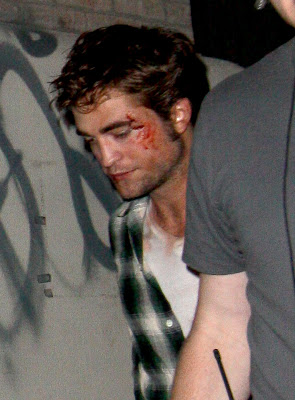 See more of a (fake) bloddied RPattz at Radar Online

Alive and Well and Offering Lot's of Goodies as my Apology

I know, I have not posted in a couple days, I am so very sorry, but I have been helping out a friend who started the http://www.twilightsettours.com/ as there has been an overwhelming amount of people coming to town and in need of their New Moon Set Stories and Sites.... I had the absolute pleasure of meeting a newlywed couple from London and a beautiful young lady from Australia and just yesterday a family from Arizon and Pensylvania.... I am amazed at how The Twilight Saga has brought people together and thrilled to be involved with showing them around and telling them the numerous stories I have from my experiences.

That being said, I have been *SO* exhausted... as those of you who have been to the sets know they are very spready out and it is a lot of travel and talking - in addition to working a few hours here and there at one of my jobs and of course the reality tv obsession I have - - - My poor computer has had little action from me the past few days...

Again, My apologies but let me offer you a little gift....

I will sneak peak a few of the photos from inside Jacob's House... yes I have been sitting on them for a while, I figured they'd be a good gift once all the other news slowed down after New Moon.... but... as I am learning, it NEVER slows down.... while I am saving all the photos for a big blog soon.... I will give you a sample as my apologies for a fwe days of not posting ;)

**Please if any other sites want to use this photo link it back to me and my page... it's respectful and I was given these from a friend who lived in Jacob's House prior to filming and went back to take these photos for me to share with you all**

Here is a shot from the back of the house where Jacob jumps over the deck and runs to morph into a wolf..... 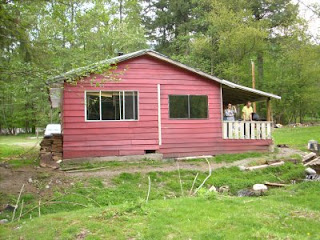 And here is a shot of inside Jacob's bedroom. It was actually not a room but they added a wall to create it into a room. *swoon* 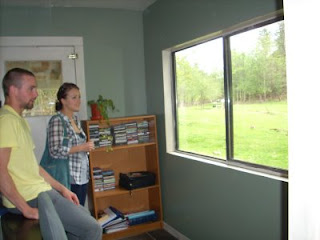 Yes, I have more.... but again, I am saving them for a very special blog coming soon :)

Taylor in Canada once again *YAY* He was spotted walking around Toronto looking cute as ever.

Tonight is the Much Music Video Awards. Taylor and Rachelle will present, Jonas Brothers are hosting... should be interesting.

There is a slew of stars performing, presenting and watching.... should be a great show.... Canadian Style ;)