After hourso f battle the new HOH has been determined, spoilers coming up....

Came down to him and Shane, Shane obviously struggling asked the other HGs to go inside so they could talk and basically said "if Dan and me are safe and no Back door I will give it to you"

There were also some rewards/punishments... so far here is what I know:

America got to choose...

-Joe was off first and has 24 hour hula boot camp (alarm goes, he has to go hula i guess?)

-Jenn was off second

Not sure the rest yet.... Will update soon

Went to an advanced screening of 'Pitch Perfect' tonight staring Anna Kendrick, Brittany Snow, Rebel Wilson, Anna Camp and Skylar Astin. My only complaint is that I have to wait until October 5 to take my friends! Pitch Perfect had me dancing in my seat, laughing out loud and leaving the theatre smiling.

In this movie, aspiring dj Becca, arrives reluctantly to the university her father is forcing her to attend, despite her desire to move to L.A. to start 'paying her dues' to move up in the music industry. The university has 4 a capella singing groups (think Glee, but with slightly less incest amongst members hooking up, yes slightly). Last years winners "Treble makers" are led by the obnoxious 'Bumper' played by Adam Devine, who comes off as just the right amount of annoying that you love to hate him. The all-female group "The Belles" led by Aubrey (Anna Camp, who was Sarah Newlin in True Blood) are struggling to recruit new members after a massive embarassment last year that has tarnished their reputation. (I will add this "embarrassment" haunts Aubrey throughout the film and is pure physical humour)

Through a series of events, Becca joins the Belles and with her dj skills is able to take the out-dated song choices and structured dance routines to the next level, but not without resistance from the controlling Aubrey. As always, Anna Kendrick is a star, she is one of my favourite young actresses, I love her facial expressions and comedic timing.

The movie also includes a budding romance involving swoon-worthy Skylar Astin playing the adorable, witty and talented Jesse. Seriously, this character has you in love with everything about him in a very non-traditional way.


Between the budding romance, the mean girl struggle and the parent/daughter issues, Pitch Perfect also has some hilarious minor characters, a part-job for Becca at the campus radio station and it throws in some epic John Hughes for good measure.

What I appreciated about this movie is that it did not have an overly obvious and predictable plot and still found subtle ways to keep me guessing and entertained until the end. The music was well integrated to prevent it from being an overtly awkward musical (no random breaking into song as they walk across campus for example) and the song choices were a good variety that everyone in the audience could dance (or sing) along.

I really loved the characters and how they all worked together, in particular 'Fat Amy' (Rebel Wilson), 'Bumper' (Adam Devine), Lily (Hana Mae Lee) and Benji (Ben Platt), Jesse's magic-loving nerd roomate. Elizabeth Banks played an emcee for the competitions and added great humour next to her chauvinistic co-host. It's just a great mix of memorable characters who come together creating some major laughs for the audience.

Loaded with one-liners, unique and memorable characters, amazing mashups and performances, this movie is a must-see! I was dancing in my seat, laughing loudly throughout and left happy with the movie overall.

I would highly reccommend going to see this movie October 5, it is hilarious and fun and entertaining and I know I will be going to see it again opening weekend!

I am so behind with contests... but here is The Apparation Prize Pack for those who love scary movies, Ashley Greene, Tom Felton, or just winning free stuff ;)

Here is what you will win in this prize pack: 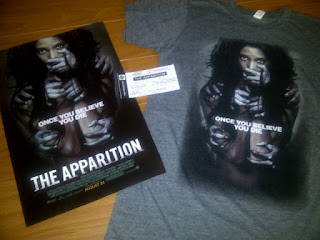 So here is how you could win:

**Remember all entries require a way for me to contact you - don't leave email address if you are not comfortable, but ensure you check back on www.mandysmind.com draw date to see if you won.

I have to admit I have been having a tough time keeping up this week on who is in an alliance with who, who is pulling who's leg and what the heck is going on....More...

Frank nominated Dan and Dani. Jenn won PoV and Ian has golden PoV from Sunday's show with the balls.

ok... then Dan said Dani was dead to him. Jenn seemed to be forming an alliance with Frank, Brit also did, Frank told Ian if he saved Dan (or Dani I guess) Britt would go up.

It sounds like Frank saved Dan and in return Dan has to get Ian out next week... not sure...

So Dani vs. Brit on the block now. Brit is confused, as she should be!!! Things are wacked!

EEK I have been off live feeds because of this conference I am at, but tonight on BBAD i noticed some crazy stuff going on - punishments.... must be a great veto....

More... Jenn won the POV and is on slop for the rest of the game. She also had to burn clothes

Frank has to wear a carrot suit for a week and can't compete in the next two HoHs. He was apparently dipped in avacado and chum bath too - gross.

Dan is in Disco Solitary Confinement for 24 hours. There are coloured disco lights, big loud speakers blaring in have not room!

Shane has no punishments

Frank was DQ'ed from the comp

It looks like Ian and Joe have no punishments either.


This is NOT cool - Frank is going to have a really tough go now.... I am rooting for Ian or Frank at this point.