Cosmopolis headed to Cannes in May - Can we have morehot Rob photos?

The European Film Market at the 62nd Berlinale was buzzing for Franco-American production The We and the I by Michel Gondry, pre-sold by the Parisian company Kinology. The new film by the director of Eternal Sunshine of a Spotless Mind was filmed last year in New York in the Bronx, and follows high school students on the bus home on the last day of the school year. The film is a sort of study of group dynamics and the evolution of relationships as the bus gradually becomes emptier, and has been acquired in Berlin for several small territories, according to Grégoire Melin, [director] who will unveil footage from the film a few weeks before Cannes, where he will also be counting on Cosmopolis by David Cronenberg, already pre-sold practically everywhere in the world.

Mandy's Mind - One of my fave photo sets are of Rob on the docks with that striped shirt and bright blue eyes, hair flowing in the wind... so hot!

Sorry for delay Real Life keeps me busy as a bee... but here are some great Berlin Bel Ami stuff 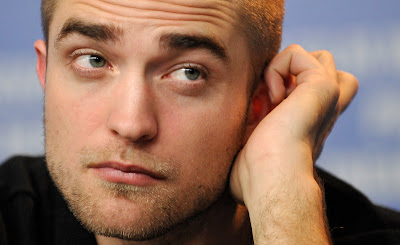 All the kids dog them.. One Direction

Posh Spice is a lucky biatch He finally joined twitter... yay!!! Team-Twilight has listed *ALL* Twilight related twitter accounts HERE
Posted by Mandy's Mind at 11:52 AM No comments: Also, I would love if you followed @Slutz4lutz on twitter as well as on tumblr - for all the sexiness of Kellan Lutz.