I've been busy and am late to the party but here is the new casting news:

■Amadou Ly (THE TESTED, THE BRIDGE)

See some photos here and predict who will play which character.
Posted by Mandy's Mind at 10:20 PM No comments:

While in Baton Rouge I spoke to the studio staff and caught a distant view of the Cullen House construction among other interesting things. Of course we were not entirely sure it was the Cullen House based on what we could see and how much was built, but we guessed it might be and are thrilled we were correct.

Here is the "fantastic" photos we got (yes, I am being VERY sarcastic)

Here are some much better photos of the house underway from various sources understandably remaining anonymous but linked to via below.

Read here about my experience in Baton Rouge two weeks ago.

I remember near the end of New Moon, Eclipse director David Slade came to town, along with Stephenie Meyer and Melissa Rosenberg and others involved with filming, and they all had a dinner-social at Blue Water Cafe.

It seems a tradition for the Twilight Cast to kick off a new movie with a "family" social dinner and they did just that in Baton Rouge in preparation for a 7+ month filming schedule.

TwiFans wrote:
The Breaking Dawn cast is filming for 7 months and last night kicked it off with a cast dinner at Fleming's Steakhouse in Baton Rouge. They didn't list Stephenie Meyer being in attendance but they did say producers.

And our insider tells us that the cast (Taylor, Kristen, Rob, Bill Condon, producers, Nikki, Ashley, Kellan) got to the restaurant around 8:30 PM and stayed until 11 PM! The stars had a full five-course meal and ate everything from Prime NY Strip steak, crab cakes, soup, salad
and they even had “fresh redfish” flown in especially for the occasion!
They finished their meal with a choice between fresh berries,
cheesecake, and creme brulee.


The cast, we’re told, was “extremely nice” and everyone remained seated throughout the night, instead of getting up and walking around the joint. Our source tells us that they even asked for the “music to be
turned down” so they could hear themselves talking to each other!

Rob wore a vintage T-shirt with a shirt unbuttoned over it with slacks, and Kristen wore jeans. They were seated right next to director Condon, Ashley and Nikki, and spent most of the night talking to them.

Mandy's Mind - This is exciting news and it reminds me so much of the excitement when it was here. Except, this time, I won't be out and about late - instead I will be glued to my computer to hear reports from locals, or emails from my friends who are locals :)

WHO DAT? Go SAINTS! (actually they are NOT doing well so far.... my seahawks, however, are doing quite well - - as long as one of my two teams is I am happy ha ha)

(10/22/10) on Twitter pictures started surfacing of Robert and Kristen in character rumored to be either the first official Breaking Dawn set pics or filming a Volvo commercial.

TwiFans has more tweets and twitpics. 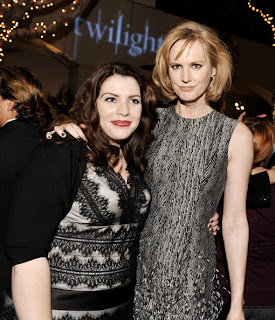 Popcorn Biz reports:
Fans of the “Twilight” films are going to have a little added story to sink their teeth into.

The previous movie adaptations of Stephanie Meyer’s vamp-lit juggernaut have gone pretty much by the book, but with the final novel “Breaking Dawn” being broken into two feature films, screenwriter Melissa Rosenberg tells PopcornBiz she’s enjoying a little more leeway to add some fangy flourishes of her own.


“I did actually [get to do that], because we got to fill out the story because we're doing the next two movies,” said Rosenberg. “So there was room to play and expand on some of the characters that Stephanie introduces. That was a lot of fun.”


“It's a much more grownup movie – It's an adult story,” the writer said of evolving the franchise beyond its high school origins. “The stakes are raised even higher because it's not the story of teens. It's the stories of grownups, so we're talking about marriage and children and family – and these are pretty grownup things, but sexy.”


If you haven’t read the books, beware of the SPOILER up ahead.


Rosenberg says the highlight of the story will be seeing Kristen Stewart’s character Bella become a vampire at long last. “Kristen gets to make the transformation and that is going to be so exciting to see. [Director] Bill [Condon] and I talked about it in developing this script and the screenplay. Now she's going to embody it. It's going to be so great.”


Rosenberg, who penned all of the “Twilight” films and previously wrote for Showtime’s “Dexter,” hasn’t quite adjusted to the fact that, minus a few rewrites, her bloody good run is coming to a close.


“It's a shocking experience after four years to not be writing ‘Twilight!’” she said.
Posted by Mandy's Mind at 3:23 AM No comments:

It is so interesting that these cast mates are being spotted in the very same place I was wandering last week... ;) heh heh

As soon as I saw the shots of Ashley Greene and Joe Jonas out and about then Kellan as well and finally the "Holy Trinity" Rob, Kristen and Taylor at the studio... I felt that excitement of filming.

Even though I am not in Baton Rouge (or rather, they are not here filming) I am still excited to bring as much news as I can throughout filming via my very awesome friends who live in Baton Rouge.

I've recieved a few emails from them already but obviously I don't feel it is my place to blog all the nitty gritty (but I promise to give you as much as I am confortable with... those of you who followed me during NM and E here in Vancouver know I try to be respectful of the actors and not give away their location until they have left, or a set address until they have wrapped. There is a reason for this, I have met crazy-scary fans who were out to cause problems and it is not my place to give them the location to do so!!!)

That being said - here is the latest and greatest "inside scoop" (if you want to call it that) on filming in Baton Rouge...

MY EXPERIENCE IN BATON ROUGE - - -

While I was there we did NOT see any cast, but for me it was really exciting to be in the area we knew they would be spending time in.

A friend of mine had the low-down on where the cast was booked to stay and we wandered through the area and it's a really nice community.

Baton Rouge has a really nice small town feel that I think may allow cast to feel more comfy to be out and about. I know that where Rob and Kristen and Taylor are staying (different from the rest of the cast) is NOT accessible. Nor are they going to be there for long... once they move, I have a feeling those three will be spotted far less than people hope - time will tell.

A friend I know talked to her friend who works at the location Rob is staying (apparently he was there when we were!!) but security is very tight on his whole floor and even staff do not come past the elevator. (ie - room service was brought to Rob's people at the elevator who brought it to his room)

Rumours are that Rob & Kristen are sharing a "love nest" and while I have NO IDEA my friend says (since no staff had access to that floor to confirm who is rooming with who) they are/were at least on the same floor - - think waht you may with that info ;) ha ha "Love nest" seems plausible non?

Apparently Rob (& Kristen?) will be moving from that spot to a private residence shortly (if not already - perhaps that is the LOVE NEST? ha ha) Reminds me of Vancouver when much of the cast moved to the private condo's more privacy, space, and security!

Speaking of security, when I went to the studio I chatted with the head security at length (about local food, various productions including Breaking Dawn, Battleship with Alexander Skarsgård, and Faith Ford's voice over work... she actually drove by and said hi as we were chatting)

They informed me that in addition to their full security staff the production company was bringing in excessive security of their own for the "twilight movie" He also said they were erecting 8 foot black privacy screens around the perimeter.

He also said we were the "first ones" to come asking about Twilight - ha ha - I assured him we were NOT the last ;)

I was so glad to be able to pop by the studio while in Louisiana. Though I spent most of my time in NOLA, we spent a day in BR to meet friends and also to go through Hammond/Ponchatoula to visit my ex's gravestone :(

Overall the trip was fun with my girlies and informative. Now, when my friend emails me details about filming or cast sightings I have been there and can understand the area better - - my trip was "research" ha ha that's it LOL

Here are a few photos - but as I mentioned before ALL my pics are up on my facebook search MANDY S MIND and add me :)

PLEASE CREDIT & LINK ANY INFORMATION OR PHOTOS YOU WISH TO USE!


Here are some recent fan pics of cast in the same community we wandered...

The Twilight Saga: Breaking Dawn is not the only movie that Joe Anderson has recently signed on to. Joe, who will play vampire Alistair in Breaking Dawn, has also signed on to star alongside Meg Ryan and 50 Cent in a film called Lives of the Saints.

Joe Anderson, who was just cast in The Twilight Saga: Breaking Dawn, Part 2, has signed to star with Curtis “50 Cent” Jackson, Meg Ryan, and Kat Dennings in Lives of the Saints. The drama will be directed by Chris Rossi and is produced and financed by Claude Dal Farra. The film is about a group of Los Angeles residents, all
wrestling with troubled pasts, who cross paths on a road they hope will
lead to redemption. Anderson, who plays a drifter trying to maintain a
quick wit despite his diminishing circumstances, recently starred in The Crazies and Across The Universe.