Apparently the reaping scene is complete, and they are now moving to DuPont State Forest to begin filming the scenes in the arena!


Reminder if you are a fitted adult -hob, coal miner, town, official -you are needed at 11:30 today!

So exciting, I wish we had more set photos and details... I am so tempted to go down for a trip ha ha ha
Posted by Mandy's Mind at 12:57 PM No comments: Robert Pattinson tosses his carry on over his shoulder as he arrives at LAX airport in Los Angeles on Saturday afternoon (June 4).

The 25-year-old actor is currently in town to attend the 2011 MTV Movie Awards tomorrow night in Universal City.

Robert will not only be presenting new footage from his upcoming flick, The Twilight Saga: Breaking Dawn Part I, but will be presenting Water For Elephants costar Reese Witherspoon with the Generation Award.

I went and saw this at the drive-in movie theatre near my place. I like the X-Men series so this was cool to see. Jennifer Lawrence was really good, can't wait to see her as Katniss. Now that the filming of The Hunger Games has begun, I’ve been getting a lot of questions about the script, so I thought I might share a little of my experience with you. Back in early 2010, Color Force and Lionsgate began the process of adapting the book to the screen and I wrote the first draft of the script. After that, we brought on veteran screenwriter Billy Ray to further develop the piece. Not only has he written and directed excellent films like Shattered Glass and Breach, he was a complete pleasure to work with. Amazingly talented, collaborative, and always respectful of the book. His adaptation further explored the world of Panem and its inhabitants. As though I wasn’t lucky enough, Oscar-nominated filmmaker Gary Ross, known for his wonderful works such as Seabiscuit and Pleasantville, came on board. As part of his creative process, he wrote a subsequent draft which incorporated his incredible directorial vision of the film. And then he very generously invited me in to work with him on it. We had an immediate and exhilarating creative connection that brought the script to the first day of shooting. Of course, the piece will naturally continue to evolve through the filming, as the actors bring the characters to life, as the entire crew brings their significant talents to the piece, as the editors work with Gary to best realize his vision. The final draft will be on the screen next March.

So that’s been the script process, and as an author, I’m truly grateful for the journey.

May the odds be ever in your favor! MTV has some sneak peaks of Breaking Dawn as we all prepare for the first ever, never before seen clip that will debut at the MTV Movie Awards Sunday!

The MTV Movie Awards are practically around the corner, and our favorite movie peeps are all happily prepping for the big night, thinking it'll just be another awards ceremony and none of us will be screaming/crying in ecstasy. WRONG. Suddenly, The Twilight Saga: Breaking Dawn has to jump in and turn us into crazy people by showing us the first glimpse of matrimonial proceedings between Edward and Bella. Now, of course, we can’t think of anything else and we are buzzing around the office like a pack of starved newborn vamps. Back in April we saw a teensy tiny sketch of Bella’s dress (long, dramatic, draped) and very coyly, the back of her be-veiled and braided head. No glimpse of the Zac Posen-designed dress yet, but we are guessing it’ll be as dramatic and breathtaking as we imagine. And we just got word (HOT OFF THE PRESSES) that Robert, Taylor, and Kristen will be on hand to personally introduce a never-before-seen exclusive clip—and we are praying to see more of the gown.

Also note Bella’s terrified grip on Charlie (CHARLIE! WE LOVE YOU!) and the up-close shot of her gold engagement ring, which was actually designed by Stephanie Meyer and inspired by Victorian Era jewelry.

Oh, speaking of Victorian, wait until you get a glimpse of the coldest brotha out there: Robert Pattinson all dolled up in his vampire-y, old school best. Not only does the vamp have TAILS, but a nice little pocket square, looking just as dapper as can be. Obvi he’d wear tails, he’s like a bajillion years old and a total gentleman and wouldn’t want his wedding day anything other than proper and classy (that’s what you get when you are with a Cullen, gals). On the right, we definitely see Esme and Carlisle (is she wearing purple?) and if any reader can identify the gal in the empire dress (Eagle-eyed reader Amber says it's Carmen of the Denali Clan), we’d sure be thankful.

More from past few days here. Click some of these.... they are big... and if you look closely... those pants have a bit of a bulge non? heh heh

I am excited about some of this casting, including Mark Povinelli who I met in New York last month for the Water for Elephants Premiere.

See release dates and news on BOTH versions of Snow White coming up... this one with Lilly COllins and Kristen Stewart's Snow White and the Huntsman. Kristen Stewart, and Chris Hemsworth’s fairy tale Snow White and the Huntsman will release June 1, 2012 (from December 2012), and Relativity moved up their Snow White with Lily Collins all the way to March 16, 2012.

For a few days, the two films were scheduled for next June.

Although there are now more space between the films, some industry observers continue to express doubt about the application of two distinct major films based on the same character in a single theater season. 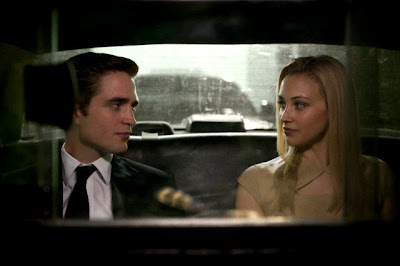 Well, to be honest, I never doubted it... obviously they have to see how the first one goes, but it seems clear it will do well non?


Lionsgate executives told Wall Street analysts this morning to expect big things from The Hunger Games, a series of four action films that the studio will release from the trilogy written by Suzanne Collins. COO Joe Drake said it was “the highest selling film we’ve ever had” at the Cannes Film Festival and that overseas exhibitors consider it “the movie that can change their company.”

Maybe they will split the 3rd book into two as they did with Harry Potter and Twilight?

Donald Sutherland cast as President Snow in The Hunger Games

President Snow has been cast! Here is the press release:

LOS ANGELES, CA, May 31, 2011- Lionsgate® and the filmmakers of THE HUNGER GAMES are pleased to announce that Donald Sutherland has been cast in the role of President Snow in the much anticipated film adaptation of Suzanne Collins’ worldwide smash hit novel.

SUTHERLAND, star of such iconic films as M*A*S*H, Ordinary People , Klute and Kelly’s Heroes, will next be seen in this summer’s comedy, Horrible Bosses and recently starred in The Mechanic with Jason Statham and Ben Foster, The Eagle with Channing Tatum and the highly-successful long form adaptation of Ken Follett’s The Pillars of the Earth.

President Snow has been the autocratic ruler of Panem and its contained districts for some 25 years at the outset of the story. With a snake-like appearance, he is cruel and ruthless in his intimidation and control tactics.

What do you think? I think it is kind of perfect!
Posted by Mandy's Mind at 10:56 PM No comments: Also a correction on casting:

It turns out that PopWrap, a normally legit source, jumped the gun on the casting of the Avox girl! Lionsgate has confirmed that Amber Chaney will be playing the Avox girl. Disney has staked out the weekend of March 8, 2013 to release the Sam Raimi-directed 3D Oz: The Great and Powerful. The film is still casting, but James Franco stars as the title character, with Mila Kunis playing Theodora, Michelle Williams in talks to play Glinda and Rachel Weisz in talks to play Evanora.


After just seeing WICKED in theatre, my Oz Obsession has been renewed... I also saw a highschool theatre play of Wizard of Oz recently... I really love everything Oz... this is good timing in my eyes, and I am happy with casting but interested in the script...